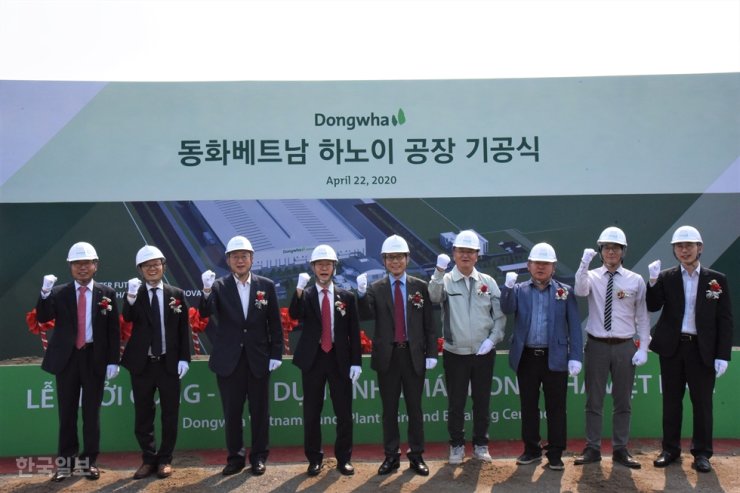 Dongwha Vietnam General Manager Kim Myung-sik, fifth from left, poses with other officials at a groundbreaking ceremony for a new production line in Hanoi, Wednesday. / Courtesy of Dongwha Enterprise

By Kim Jae-heunKorea's top wood materials manufacturer Dongwha Enterprise began construction of its very first independent production facility in Vietnam.The plant, which is located in Thai Nguyen Province near the capital city of Hanoi, will mainly produce laminate flooring and medium-density fiberboard (MDF) that is used to make furniture.Dongwha Enterprise held a ground-breaking ceremony for its new facility on Wednesday and made an official announcement of the production line construction.A total 180 billion won has been invested in the plant which covers 50,000 square meters. The plant construction site will not only include production facilities but also dormitory and education facilities for workers and their families.Dongwha Enterprise expects to complete construction of the manufacturing plants for laminate flooring and MDF in April and August next year, respectively. The wood material firm aims to make 370,000 cubic meters of MDF and 3.62 million square meters of laminate floor annually.When the construction of Dongwha Enterprise's production facility is completed, it is expected to produce a total of 1.07 million cubic meters of MDF in cooperation with VRG Dongwha in Ho Chi Minh City, a joint venture between Dongwha International and Vietnam Rubber Group (VRG). VRG is a state-own conglomerate well-known for its leading role in Vietnam's rubber plantation and processing industry in Binh Phuoc. This will establish Dongwha's presence as a dominant player in the edge-of-seat game that is the MDF manufacturing market in Vietnam.

The construction business boom in northern Vietnam is also a favorable factor for Dongwha. Currently, Hanoi is actively carrying out a large-scale city development project in its northern area and this means growth potential for the construction materials market including MDF.General Manager Kim Myung-sik of Dongwha Vietnam said the distance between the southern part and the northern part of Vietnam is 1,700 kilometers and VRG Dongwha had difficulties satisfying the market demands in the north.'Through the construction of our plant near Hanoi, we will take occupation of the MDF and laminate floor markets in the north while solidifying our status as a leading player in the wood board and construction material sectors here,' said Kim Myung-sik, general manager of Dongwha Vietnam.Dongwha established a joint venture with VRG in 2008 and entered the Vietnamese MDF market. It is currently taking up 40 percent of the MDF market in southern Vietnam and continues to grow at a fast pace.Based on its 10-year relationship with the Vietnamese government, Dongwha Enterprise earned the approval to build an independent production facility line in Hanoi last July.